Vietnam, the world’s second-largest exporter after Brazil, shipped 40,000 tons in August, down 24.5 percent from the previous month. Coffee exports in the first eight months of the year were estimated by the General Statistics Office at 958,000 tons, 11 percent higher than a year earlier.

Only on April 29, the State Bank of Vietnam increased the dollar purchase price by 214 dong per dollar, in comparison with the price of April 28. Prior to that, the central bank kept the purchase prices at low levels for a long time. The statistics show big gaps between the market prices quoted by Vietcombank and the exchange rates announced by the State Bank’s Exchange, which have existed since early April.

The requirement has become more urgent at a time when April’s CPI climbed to 3.32 per cent, the highest and most extraordinary level since May, 2008. Statistics show that between 1994 and 2010, April CPI reached an average increase of 0.3 per cent over the previous month. Even during the global financial crisis in 2008, the April CPI stood at 2.2 per cent. April’s CPI pushed the country’s inflation in the first four months of this year to 9.64 per cent, outdistancing targets set for the whole year.

Vietnam, which last year pushed for strong growth, now is battling some of the highest inflation in Asia. In February, the government devalued the dong 8.5 percent and it has taken other steps, but so far inflation rates have continued to rise.For April, the consumer price index rose 3.32 percent from March, the highest since May 2008, the General Statistics Office said on Sunday. The annual inflation in April – 17.51 percent – was the highest for the past 27 months.

According to Ministry of Planning and Investment’s Department for Economic Zones Management statistics, 127 operating industrial zones (IZs) are yet to have in place waste-water treatment facilities currently, making up 40 per cent. Of which 40 IZs have been brought online with urgent needs to build such necessary facilities.

Export turnover at USD 12.34 billion since early this year

The General Statistics Office (GSO) of Vietnam reported that the country’s export turnover in February, 2011 reached USD 5.25 billion, raising the figure for the first two months to USD 12.34 billion, a year-on-year rise of 40.3%.

Card payment system yet to become popular in Vietnam

Although there was no official data on transaction statistics of individual customers through ATM and POS, according to commercial banks, most transactions were made in mainly cash (80 percent -85 percent), while the payment card accounted for less than 5 percent.

According to statistics, the country requires around 800,000 tons of fertilizer for the winter-spring crop. Currently companies have over 750,000 tons of stock ready to meet the increasing demand without inflating the price.

The government’s statistics office said on Monday the consumer price index rose 1.74% in January from December, and 12.17% from a year earlier, the highest annual reading since February 2009. December’s annual inflation rate stood at 11.75%, and monthly inflation hit 1.98%.

According to regulations, people working for government departments or the armed forces for at least three years and living in a leased house are eligible buy a public house. Statistics from the Department show 8,300 public houses were built in HCMC in the last five years at more than VND422 billion (US$21 million), but 84 have been sold. Buyers have to make a down payment of 20 percent of the cost and pay the rest in installments over 15-20 years. The Department expects more than 6,500 public housing projects with 22,400 units to be completed in the next five years. 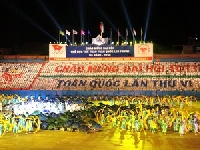 The organising board presented VND2 million to each athlete who set a national record. According to the board’s statistics, 102 athletes set national records at the festival.