The real estate has been decreasing sharply in all areas of Hanoi. Nam An Khanh, Trung Van or Van Canh areas have seen the prices down by 20-25 percent. As a result, the busy real estate trading floors, which had been prosperous for the last many years, have to shut down and lay off workers.

Six companies operating in the real estate sector have recently announced the business results in the first quarter of this year.

According to Nguyen Hong Phuc, general director of Nha Viet Investment and Construction Joint Stock Company, such changes of ownership were common in the first quarter of this year, though transaction details were often kept secret, especially if sellers were small businesses facing a shortage of capital. Since the second half of 2010, as the real estate market has taken a downturn, there are many such businesses.

Taxes due in the first two quarters can be paid respectively by April 30 and July 30 next year. Those due for the last two quarters have been deferred until October 30, 2012, and March 31, 2013. However, tax on income earned from real estate, financial, banking, insurance, and securities transactionsb have to be paid normally

When asked whether he had met with the Vietnamese government to proceed with the plan, Adelson said, “About a year and a half ago, during a real estate survey, some representatives of Vietnam’s Ministry of Finance and Ministry of Industry and Trade asked me if I had any plan to open a casino in Vietnam. I told them that I really wanted to.” However, Adelson said, “The problem is that Vietnam does not allow its citizens to access the casino. We have been told that if we set up a casino in Vietnam, the customer base for our casino is limited to the foreigners in Vietnam only.”

Real estate market in 2011 to depend much on government policies: Experts

In 2011, experts forecast that the property market would entirely depend on the government’s policies applied to curb price increases and seek capital sources for the market. According to Prof Dr Dang Hung Vo, there would be two main scenarios for property market in 2011.

Tourism real estate under inspection in 2011

Throughout 2011, The Ministry of Planning and Investment will send its inspectors to six provinces with the largest number of registered resort projects.

Real estate market to be stable and transparent in 2011: market experts

Merger and acquisition (M&A) trend would also create new dynamics to the market.

Real estate investment trust (REIT) is a tax designation for a corporate entity investing in real estate that reduces or eliminates corporate income taxes. In return, REITs are required to distribute 90 per cent of their income, which may be taxable, into the hands of investors.

This is of the important points of the draft Strategy for Developing Housing until 2020 with a vision for 2030, which was devised and submitted to the Government by the Ministry of Construction. The real estate credit fund will be used for investments in real estate, including housing. It aims to mobilize the idle capital held among people through the issuance of the fund certificates and to reduce current reliance on banks.

The two market segments which are believed to be most bustling in 2011 are residential estates, especially mini apartment blocs, and high grade resorts. apartments will be sold to those with real demand for accommodation, while high grade resorts will be reserved for high income earners, who are always ready to spend money.Real estate investment always requires big capital. But the current policies do not create good conditions for individual investors who are short of capital. 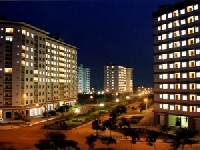 Vietnam’s economy and Hanoi’s in particular were expected to face some challenges including high inflation, devaluation of the Vietnamese dong, high interest rates and changes in land policies. This will make a direct impact on the real estate market.