The key task for the remaining months of the year to continue with a tightened monetary policy while allowing credit for production in order to achieve the goals of containing inflation and maintaining a rational growth of around 6 per cent.

Deputy director Hoang Minh Hao said payments via bank transfer were mentioned in the draft of the Labour Code, which has been proposed to the government for comments, as an alternative to cash payments. 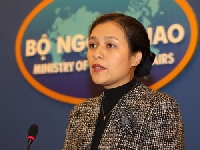 “Terrorists must bear responsibility for their acts and should be severely punished,” Nguyen Phuong Nga, spokesperson of Vietnamese Foreign Ministry, said.

Under the new decree, health, education, cultural and sport infrastructure projects, as well as head offices of State entities have been added to the list of projects encouraged to register under one of these investment forms.

Retired diplomatic cars may be taxed

The tax is being proposed for cars which otherwise would have qualified for tax exemptions enjoyed by diplomatic agencies and embassies in Viet Nam.

The type, quantity and origin of imported equipment and materials must be in accordance with contracts. Lists must be registered annually or for the entire project duration.

Producers and importers must register for certification to affix energy labels within 60 working days of the effective date of the regulation. The decree also requires major energy users to apply energy management systems under which they must promulgate energy efficiency and conservation policies and targets; conduct energy audits; and assign staff and propose managerial and technological solutions to promote energy efficiency and conservation.

The coins were reintroduced after a long gap in 2003 to enable their use in coin-operated machines.

Vietnam has already forbidden banks from lending gold for the production and trade of gold bars since October last year. But starting May 1 banks are not allowed to offer gold loans to jewelry makers either.

Under Government Resolution No 11/NQ-CP issued in February to curb inflation, the ministry asked municipal and provincial People’s Committees to improve price management. The localities are boosting price inspections and reporting, control price-forming factors, releasing information to the public about pricing violations via mass media, and tightening State budget spending. The ministry has asked agencies from central to local levels to cut 10 per cent of recurrent expenditures for the last nine months of this year.