Through the Valley is a collaborative project of the Goethe Institute, Viet Nam National Opera and Ballet (VNOB) and Viet Nam National Academy of Music (VNAM). The staging of the work marks the finale of Germany Year in Viet Nam – 2010. The opera is a piece of musical theatre piece composed especially for this German-Vietnamese co-production, explains Almuth Meyer-Zollitsch, director of Goethe Institute Viet Nam

Artist Tran Duc Vien, a retired dancing teacher, proposed to shorten existing dance training courses at art institutes throughout the country. "The folk dance training schedule is too long now, which has led to a waste of time and finances," Vien said. "Concerned agencies should publish folk dances of ethnic groups in more systematically designed course books to be officially used at art institutes throughout the country."

The Centre for Viet Nam Guinness Records says the unique display at the Thoai Son District's Cultural and Tourism Complex, southern An Giang Province, will be included in the new listings to be announced on Saturday.

The sound of flute kites now rises and then falls, reminding people of Viet Nam's countryside images with spacious rice paddy, little boys falling into sleep because of the lullable flute kite on clear sky while still herding their buffaloes on the hills. 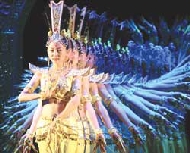 The China Disabled People's Performing Arts Troupe will perform the dances Goddess of Mercy with Hundreds of Arms and Thousands of Eyes and My Dream. The vocal, musical and dance performances of the troupe cover such styles as ballet, Latin dance, and modern dance, as well as elements from Peking opera and musical drama. New forms, such as sign-language poems and dances by the visually impaired are also included in their shows.

The bulletin, a yearbook of the fine arts scene, has been published annually since 2002 and has been warmly received by experts for its form and full-colour content. The 300-page, lavishly illustrated 2008 edition contains articles on ancient and contemporary fine arts and applied arts.

The play is directed by People’s Artist Pham Anh Phuong and choreographed by French artist Bertrand D’at and Australian assistant Mark Pace. Unlike the original story which is a tragedy, the dance drama don’t focus on war, but bringing message of peace with a happy ending and praising timeless love.

The 400-page book, My Thuat Viet Nam The Ky 20 (Vietnamese Fine Arts during the 20th Century), has four chapters and two addenda of photos that feature different styles of painting by talented artists of the last century.