The Forest Sector Support Partnership (FSSP) will continue working with the Vietnamese government to address major issues in the forestry sector, said Juergen Hess, Co-chair of the annual review meeting of the FSSP. 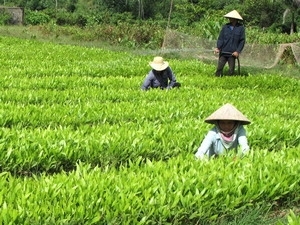 In the period 2011-2015, the FSSP will expand the involvement of the private sector, industry associations and non-governmental organisations in the country, he said.

At the FSSP meeting in Hanoi on January 25, Deputy Minister of Agriculture and Rural Development (MARD) Hua Duc Nhi praised the level of assistance provided by many international organisations, including those from Finland , Germany , Switzerland , the UN Food and Agriculture Organisation (FAO) and the Japan International Cooperation Agency (JICA). They have helped to develop the Vietnamese forestry sector, improving the lives of rural people, especially forest workers, generate jobs and minimise impacts of climate change.

According to Nhi, during the 2006-2010 period, the MARD launched several practical activities to combat desertification and adapt to climate change. Thanks to this, in 2010, the forestry sector’s production value saw an increase of 4 percent, the highest growth in this period and forest coverage increased from 37.7 percent in 2006 to 39.5 percent in 2010.

Vietnam is the first country in Southeast Asia that has paid for environmental services. The country’s forestry sector has shifted from the state-owned model to a social forest development model with many different economic sectors involved. Individual households play a key role in afforestation and private businesses are mainly responsible for the processing of forest products.

However, Nhi also pointed out several shortcomings and constraints in the development of the forestry sector in Vietnam such as low productivity, the poor quality of natural forests. In addition, illegal logging has been happening in a number of provinces.

To reach a forest coverage of 40 percent and a forest product export turnover of 3.8 billion USD in 2011, the forestry sector has set out a number of measures, including raising public awareness of the need to protect forests, implementing policies to encourage afforestation and forest protection, and supporting certification for the owners of forests.