Vietnam introduced to the public for the first time a book detailing its land border with China in Hanoi on Jan. 25. 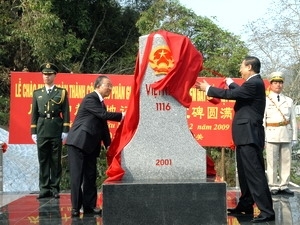 It provides relatively complete, comprehensive and accurate details on the land border between Vietnam and China through historical phases as well as the line which was newly established in written documents, on maps and in the field, clearly and specifically, in conformity with international law.

Consisting of five chapters, the book provides a general and systematic introduction about the country’s construction and defence of its border areas through various dynasties. It also provides precisely the Party and State’s policies and guidance in handling land border issues with China as well as the issues related to the country’s territorial sovereignty and integrity.

The book also offers basic and thorough information on the two countries’ land border negotiation process together with assessments of the outcomes of demarcation and planting of boundary markers along the Vietnam-China land border.

It also refers to the task of strengthening, maintaining, and building the Vietnam-China borderline into one of peace, friendship, cooperation and development.

Professor Vu Duong Ninh, a member of the compiling board, said the compilers began their work for the book in November, 2009.

Apart from collecting materials, they made field surveys at border areas in Lang Son and Cao Bang provinces with the focus on Ban Gioc waterfall and gathered opinions from leading specialists on border issues.

According to Head of the Foreign News Service Department of the Ministry of Information and Communication Le Nghiem, the book will be translated into English in mid-2011 and distributed both in and outside the country.

Vietnam shares its land border with China , Laos and Cambodia.