Kyocera Corp. plans to invest around 30 billion JPY in building a plant to manufacture electronic parts for mobile phones and other electronic devices in the suburbs of Hanoi. 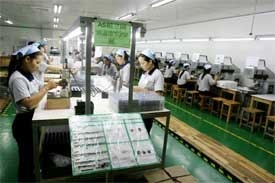 Kyocera Corp. President Tetsuo Kuba was quoted as saying at a news conference in Osaka on April 27 that the company will start the construction by the end of this year as it looks to commence the plant’s operations in late 2012.

The plant is designed to cover about 400,000 sq. m in Hanoi’s suburb area, to be on a par with Kyocera's largest overseas factory in China.

It will churn out electronic components used in cellular phones, personal computers and other devices, as well as copiers for subsidiary Kyocera Mita Corp.

"We're expanding facilities in areas of Asia outside of China, where we already have a manufacturing base," President Kuba said, adding that the plant will be a major base for Kyocera Corp.'s sales expansion.

The parts and equipment will be exported to China, Europe, the US and Japan, according to the Japanese daily of Nikkei.

Kyocera Corporation develops, produces and distributes a range of products for the information and communications market and environment and energy market worldwide.