In order to improve the effectiveness of “Vietnam’s Sea Strategy up to 2020,” Vietnam needs to enhance its planning for the development of sea ports. 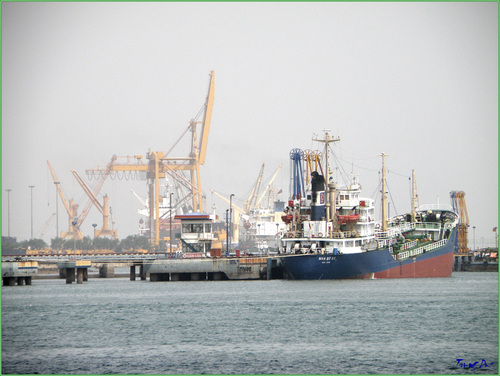 The “Vietnam’s Sea Strategy up to 2020” aims to turn Vietnam into a strong marine-based economy, with the marine economy accounting for 53-55 percent of the Gross Domestic Product (GDP).

Located on the Gulf of Tonkin Economic Belt, the Northeastern region of Vietnam, with Hai Phong and Quang Ninh at its centre, has taken advantage of its natural potential to develop the marine economy. It is now a strategic region for international and domestic business activities and a gateway to the seas of the Northern Vietnam key economic region.

For more than 100 years, Hai Phong port has played a crucial role in the import-export activities of Vietnam’s Northern provinces and is now one of the most important ports in Southeast Asia. Cargo transported via the city increased from 6 million tonnes in 1996 to 38 million tonnes in 2010.

Dan Duc Hiep, Vice Chairman of the Hai Phong Municipal People’s Committee, said Hai Phong, with fully-equipped infrastructure, attracts goods from all over the world to Vietnam and to some southern provinces of China.

70 percent of the world’s goods is transported by sea, so Hai Phong’s development strategy is focused on developing sea ports, not only for Hai Phong but for the whole northern region as well as some of China’s southern provinces, he said.

Its potential to develop marine economy has helped Hai Phong maintain a high annual growth rate of 11 percent over the past five years, with industry and service sectors making up 90 percent of the province’s GDP.  Hai Phong is also becoming an attractive destination for foreign investors. 28 countries have invested in 280 projects in the city with a total investment of US$4.3 billion.

Even without geological and historical advantages of Hai Phong, Quang Ninh province developed a system of ports with Cai Lan port, which can receive 40,000-tonne-container vessels, Cam Pha port for coal transportation, and the B12 oil terminal port which can receive 5,000-tonne vessels. The volume of cargo transported through Quang Ninh has continued ton increase over the years, reaching 23 million tonnes in 2010.

In addition to strengthening its marine industry, sea port activities, and exploitation of aquatic products, aquatic breeding and exploitation, Quang Ninh has focused on developing sea and island tourism. As a result, the number of visitors to the province has increased to about 4 million in 2010. Quang Ninh also enjoys a high economic growth rate in comparison to other Northern key economic provinces.

In addition, Hai Phong and Quang Ninh are seeing the development of other industries and services such as storage, land and marine transportation, and petrol, oil, gas, steel, and cement distribution services. Their shipbuilding industry is experiencing significant development with Song Cam, Nam Trieu, Tam Bac, Bach Dang, Pha Rung, and Ha Long shipbuilding factories which together account for 50 percent of the whole country’s shipbuilders’ output.

According to the Vietnam sea port plan to 2020 with orientation to 2030, Hai Phong is to become an international gateway port and Vietnam’s biggest port complex with four key harbours, namely Lach Huyen, Dinh Vu, Song Cam, and Song Chanh. The city is now investing US$179 million to build the Cai Lan container port, which will be able to receive 40,000-tonne container vessel, and VND17,000 billion into Lach Huyen international port. Once put into operation in 2014 or 2015, Lach Huyen port is expected to receive 100,000-tonne vessels.

Associate Professor Bui Tat Thang, Deputy Director of the Institute for Strategy and Development under the Ministry of Planning and Investment, said effective planning is needed for the development of sea ports in the Northern region to take full advantage of sea transportation.

Sea ports from Quang Ninh to Hai Phong should be connected in a development chain, Thang said.

In order to turn Vietnam into a strong marine-based economy, the country needs not only deep-water ports but also large vessels and a close cooperation between businesses and local authorities. The Vietnam National Shipping Lines (Vinalines), which has taken over some projects from the Vietnam Shipbuilding Industry Corporation, is increasing its investment capital in an effort to build a leading fleet of vessels in the Southeast Asian region.

In addition, authorities are making great effort to remedy shortcomings in investment policies, administrative procedures, shortage of labourers, and the poor infrastructure. As the Northern economic region sees a significant development, Hai Phong and Quang Ninh will be gateways to connect Vietnam Northeastern region with China’s Southwestern provinces, especially when the Lao Cai-Hanoi and Hanoi-Hai Phong highways are completed.