Structural steel producers and traders are keeping a close watch on the changes in the dollar price . They say with the current dollar price, they are incurring the losses of 80,000-150,000 dong per ton, though the world steel ingot price has been stable at $580 per ton. A steel mill has revealed it would raise the sale price next week, at least by 150,000 dong per ton, in order to break even.

Discount sales on 1,500 items will see prices slashed by 5% – 50% on items like fresh food, processed food, clothing and household goods.

Supermarkets in HCM City have decided to increase prices of essential goods this month as asked for by their suppliers. Retailer Saigon Co.op, owner of the Co.opMart supermarket chain with 50 supermarkets and 12 convenience stores nationwide, has announced new prices of plastic products, meat, soft drinks and dairy products. These items will see prices to rise by between 5% and 15%.

Budgetary spending will be tightly managed and controlled; unnecessary spending will be cut, such as spending for meetings and foreign business trips; and misdirected allocation of funds will be eliminated. These measures will lay the groundwork for stabilising the macro-economy, boosting growth, shifting economic restructuring and ensuring social security. In addition, price regulation and management will be based on market principles under the State administration. There will be a roadmap drawn up to adjust the prices of a number of goods and services whose prices the State has set.

The stable costs of essential goods during the year’s largest festival were attributed to the Government’s business support policies. According to the Finance Ministry, subsidised loans were made available for businesses in 42 provinces and cities that implemented the price stabilisation programme with a total investment of over VND2.5 trillion (US$218 million).

Now people talk more about the “Sony effect”. More and more foreign investors have been importing goods and selling them on the domestic market. According to the Ministry of Industry and Trade, in 2010, 525 foreign invested projects were put on the table of management agencies. Of these projects, the ministry estimates that 235 projects can meet the legal requirements, including 175 projects which applied for trading goods as an additional business activity, and 60 projects which applied for investment licenses for the first time.

Low-quality electronics at border area markets are defects from China?

The problem is that the majority of Vietnamese people are still poor and they can easily be persuaded by the low prices. They do not understand the bad effects of the low quality products. Nguyen Van Thuyen from the Hanoi University of Technology said that local Chinese goods always look attractive thanks to the diversified designs. However, careful examination shows their, people can absolutely discver low quality, visible even to the naked eyes. The low quality products are colorful but the words on the products are blur due to the bad printing technique.

The event attracted 200 showcases by 17 businesses from My Tho city and 70 other from Tien Giang and neighbouring provinces. Most of them displayed agricultural and industrial products and services under the campaign “Vietnamese people use Vietnamese goods”. It is headquartered at 18-20 Phuoc Hung street, District 5 and its trading floor is at 52 Nguyen Cong Tru street, District 1, HCM City.Vietnam Goods Exchange has its charter capital of VND150 billion, and three main kinds of goods-coffee, rubber and steel-for transaction. The model of operation consists of three parts: a trading floor, a balance payment centre, and a goods verification and transaction centre. 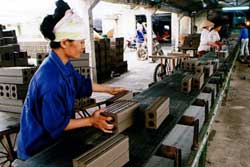 Director of the department Vu Van Truong said the items would mainly include agricultural produce, seafood, construction materials and electrical appliances. The average drop for most items would be 2-3 per cent, said Truong. The cut, part of Viet Nam's commitment to the World Trade Organisation, was expected to benefit domestic consumers, giving them a wider choice of reasonably priced imported goods, Truong said.