The project with a capacity of 20,000 cu.m a day will be built in 24 months with nearly 10.9 million EUR in official development assistance loan from Finland.

These included foreign and domestic investors, economic-sector, ministry and international organisation representatives as well as diplomats. They will be shown the investment opportunities and economic potential of 12 north-western provinces as well as western Thanh Hoa and Nghe An provinces during the one-day conference. Participants will also witness the important presentation of investment certificates and the of signing investment co-operation agreements. 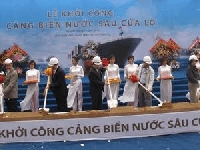 The port will serve exports and imports to and from Laos and northeastern Thailand as well as meet the socio-economic needs of nearby provinces and is in line with the development plan for an economic zone in the southern Thanh Hoa-North Nghe An.

The 11-month figure was put at VND478.6 trillion ($22.8 billion), a year-on-year increase of 22.6 per cent and 3.7 per cent higher than planned. Thirty-two provinces, including Bac Giang, Nghe An, Lao Cai, Quang Ninh, Hau Giang and Ha Giang, have met their yearly revenue target.

Oyster harvests on the decline

Nam Dinh has more than 1,500ha of tidal flats in Giao Thuy and Nghia Hung districts. In Giao Xuan Commune in Giao Thuy, there are more than 100 oyster breeding households with 300ha of farming land. Since 1997 local farmers have had to buy young oysters from different provinces. Because of the poor living environment, young oysters from central Thanh Hoa and Nghe An provinces were degenerate. Moreover, the province does not have an oyster processing factory. Also the development of oyster breeding in Nam Dinh was relatively uncontrolled.