An ore-bauxite factory in the complex will be put into operation in April this year. At present, the Tan Rai Aluminum Buxite Poject has finalised almost 90 percent of work while the Nhan Co Alumin Project is conducting a geological survey for the implementation of the remaining part in the future. 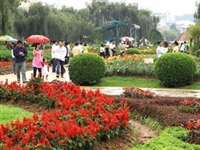 According to the province’s Department of Culture, Sports and Tourism, this is the first time the number of tourists in Lam Dong exceeded 3 million, among whom 163,000 were foreign visitors.

The gifts included 10 tropical almond trees and 21 pieces of coral stones selected from 21 islands in the archipelago, which symbolise the nation’s sovereignty over its seas and islands.

Born in a remote village near Da Lat in central-highland Lam Dong Province, K'Chin broke his leg as an infant and spent his first 13 years crawling or hopping because he could not walk. Rotary Oceania Medical Aid for Children took him to Australia in 2002 and provided him with both medial treatment and an education.

The event is expected to create chance for tea producers in the province to introduce the various tea products to people across the country.

Trung Thuy to build resort on disputed land in Dalat

The Trung Thuy Group Corporation is readying ground breaking for its US$20-million resort on a two-hectare area in Dalat City, a site earlier allocated to Hoang Anh Gia Lai Group (HAGL) and then controversially recalled by Lam Dong Province.