The bridge connecting two communes of Dak Ang and Dak Nong was opened in July. Before that, local residents used a pulley system to cross the river for nearly a year after a severe flood swept away the old bridge in 2009. The new bridge cost over VND120 million (US$6,000), with the money coming from a donor and local residents carrying out the construction work. 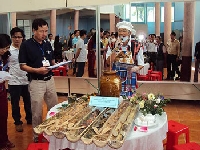