The Vietnamese insurance market is being competed by both domestic and international insurers and is hurt by economic challenges. Hence, insurers are forecast to face difficulties in funds and premiums. Optimistically, insurers reported revenues growth of 10-15 percent in the first eight months.

State to pay 100 per cent of farm insurance

Under the two-year pilot programme, the government will pay 100 percent of the insurance premiums for poor farming households and individual farmers.

FDI should be on the right track

Many foreign-invested enterprises in Vietnam are struggling at the bottom of the value chain. “On average, only 5 percent foreign investors nationwide invests in advanced technology production and information and communication technology; 5 percent takes part in scientific and technical services; and 3.5 percent in insurance or finance, which all require high-caliber workforce,” states the PCI report. “Foreign-invested businesses’ trend toward raw material exploitation should be scrutinized and analyzed carefully,” Dr. Tran Dinh Thien, director of the Vietnam Institute of Economics, stressed.

SMEs’ income from property, financial, banking, insurance, and securities transactions and services that attract special consumption tax too will not be eligible under the program.

Taxes due in the first two quarters can be paid respectively by April 30 and July 30 next year. Those due for the last two quarters have been deferred until October 30, 2012, and March 31, 2013. However, tax on income earned from real estate, financial, banking, insurance, and securities transactionsb have to be paid normally

Starting from January 1, 2009, the Social Insurance Law on Unemployment Insurance has come to effect. After two years of implementation, till the end of December 2010, Vietnam had 7.05 million people joining the unemployment insurance (accounting for 75% of the total number of laborers involved in compulsory insurance), increasing nearly 20% against 2009′s. The total revenue from unemployment insurance fee reached 8.3 trillion dong.

No immediate plans to pull capital from Bao Viet: SCIC

Nguyen Minh Hai, a securities analyst with a Ha Noi-based securities company, said that it was clearly an unusual event for an insurance stock, especially when taken in comparison to its business earnings. “The insurance industry is characterised by stability with no profit mutations,” Hai said, adding that the abnormal behaviour of the stock had distorted the VN-Index.

The loans to Vinashin, as the company is known, will have a maximum maturity of 12 months, the directive from Prime Minister Nguyen Tan Dung said on the government’s website, without giving a value. They will help the company pay wages, severance allowances and social, health and unemployment insurance.

Deputy general director of Viet Nam Social Insurance Nguyen Minh Thao said after a year of implementing the Law on Health Insurance, the fund's management and utilisation had seen positive changes. In the years from 2005-09, the fund was overstretched and at the end of last year, it was in a deficit of VND3 trillion ($150 million).

The bank branch also pledged to create favorable conditions for the National Money Printing Factory to access effectively to non-credit products including international payments, L/C opening, and value-added products such as foreign exchanges, insurance and others. 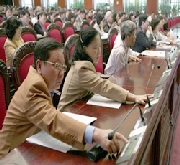 The non-life insurance sector reported growth of 25.97 percent in premium income, which topped 12.417 trillion VND (621 million USD). Motor vehicles represented the largest segment, with 3.885 trillion VND, up almost a fifth over the same period in 2009. Health and personal accident insurance followed with almost 1.7 trillion VND, up 28.74 percent, ahead of construction and installation with 1.43 trillion VND (28.3 percent).

To this effect, a five-year insurance contract was signed between PVI and the Bien Dong Petroleum Operating Co. under the Vietnam Oil and Gas Group (PVN), in Ho Chi Minh City on November 22.