Bac Ninh People’s Committee has just submitted a proposal to the government to add Hap Linh golf course into the Golf Course Development Plan of Vietnam to 2020. Vu Duc Quyet, director of Bac Ninh Industrial Zone Management Board – in charge of the project’s management, told VIR there was a real need for entertainment facilities to serve foreign and high-end customers in this northern province. Bac Ninh is home to many projects invested by high-profile foreign companies like Canon, Foxconn, Orion and Samsung with 1,000 foreigners working in the area.

The project has total investment capital of $80 million, to be sited in an area of 304.405 hectares in communes of An Binh, Hoa Thuong, Mao Dien, Thuan Thanh Dist, Bac Ninh province.

The new industrial zone will be sited in an area of 200 hectares in Nhuan Trach Commune, Luong Son Dist, Hoa Binh province.

FDI to flow into garments

Vitas vice chairman Le Van Dao said Taiwan, Hong Kong and South Korea would remain the biggest investors in Viet Nam's garment and textiles industry. He said several Taiwanese investors had plans to enlarge their investment in Viet Nam. For example, Eclat Textile Co, which has a factory in southern Dong Nai Province's Nhon Trach Industrial Zone, plans to buy a US$2.5 million factory capable of producing about 3-3.5 million units of garments and knitwear a year. Eclat also plans to invest roughly $4 million to set up a new garment factory that will have the capacity to produce 2.5 million units each year. 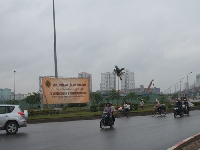 Lining up to applaud Bac Ninh