In Da Nang, demand for apartments and villas chiefly came from buyers in Hanoi and HCM City, mostly for investment rather than use. In future 17,900 apartments in 27 projects and 1,060 villas in 20 projects are expected to hit the market.

The FDI disbursement in April reached around US $1.08 billion, bringing the total figure to US $3.62 billion in the past four months, or a year-on-year increase of 0.6%.

The HCM City bourse-listed Eximbank (EIB) posted a pre-tax profit of more than VND1 trillion (US$50.7 million), up 26 per over the same period last year and over 35 per cent of its annual target of VND3 trillion ($144 million).

Dollar inflows transferred on account last week doubled from the week earlier, an unnamed director of a big commercial bank in HCM city revealed. Notably, the lender bought $15million within a week compared to $1-2million/week previously, mainly comes from the public.

VICOFA held a meeting in HCM City on April 9 to review business activities in the 2008-2010 tenure and devise orientations for the next tenure. 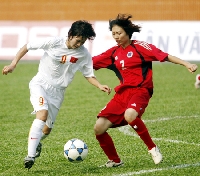 Nguyen Dinh Tung, deputy general director of Maritime Bank, told reporters in HCM City on Tuesday that the bank was restructuring its credit portfolio with more loans for SMEs operating in the manufacturing sector.