Can Tho oil refinery project will come true?

The Can Tho Oil Refinery project was granted investment license in 2008. The refinery was planned to cover an area of 250 hectares and have the investment capital of $538 million (the Vien Dong Investment and Trade Corporation contributing 30 percent of capital, and the US Semtech Lit 70 percent). The oil refinery was expected to have the capacity of two million tons a year. However, after the US partner decided to withdraw from the joint venture, Vien Dong Company asked for the permission to change the scale of the project. The newly designed project is expected to cover an area of 50 hectares, have the investment capital of $350 million and will have the capacity of million tons. The oil refinery will churn out A92, A95, diesel, and slight naphtha. The British Vitol has committed to provide crude oil to the project.

Can Tho International Terminal inaugurated

This international terminal is located in an area of over 20,700 square metres. It will serve 3-5 million passengers every year, including C-level. It includes a 2-floor building, two stations and a parking place.

Television festival kick-offs in Can Tho

The seven-day festival will offer more than 700 entries in 10 genres including trailers, that will be making their first appearance at the festival. "It's good news that trailers will be shown at the festival for the first time. Trailers will make a big contribution to advertising television shows," said Ha Nam, deputy-head of the organisation board.

Can Tho hosts int’l agriculture fair 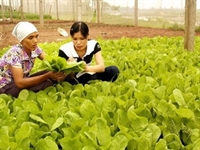 Can Tho to host Vietnam International Agriculture Fair 2010

The event, which focuses on linking hi-tech agricultural manufacture with Vietnam’s agricultural development, will display products of the sector such as agricultural equipment and machinery, pesticide, domestic animal, breeds rice, and the application of biological technology.