The price increased to VND60,000 (US$3) per kg of keo fish since Monday, VND10,000 (module_ussslot1_2_1_2_1_data.5) higher than a couple of weeks ago, during the height of the rumour-mongering. To Thanh Diep, a trader in southern most Ca Mau Province, said consumers started to buy the fish again after the fish received a clean bill of health. 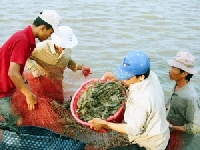 The report , “Losses and Damages – The Impacts of Climate Change on Poor People in Vietnam and Their Response s”, was based on results of a study conducted in Loc Ha district in the central province of Ha Tinh and Nam Can district in the southernmost province of Ca Mau from July to October 2010.